Soon I’m going to be posting my build for the USS Ramillies, but before that, I want to talk about an aspect of power management that some may not realise.

Efficiency, and how it’s applied.

‘Efficiency’, as a term of game mechanics, refers to a starship’s effective overall subsystem power levels against the amount of base investment that is needed to produce that number.

Subsystem power is one of the least-taught and most important parts of a ship’s performance, as it affects absolutely every last facet of its key characteristics, abilities, and skills that you use. A starship has four major subsystems – weapons, shields, engines, and auxilliary – and the amount of power that is available to each of these subsystems directly determines how effective each area of your ship is.

The shields subsystem affects both your shields’ innate ‘hardness’ (how much damage they can reduce through resistance) and regeneration rates.

The engines subsystem affects your speed and maneuverability (and consequently, your ability to evade certain AOE debuffs such as gravity well.)

The auxilliary subsystem affects the performance of your scientific abilities (such as the aforementioned gravity well, or perhaps sensor sweep) in addition to the effectiveness of many resistance heals and immunities – including Aux to Structural, Hazard Emitters, and Polarize Hull.

Overall, a starship has – base – 200 units of power to distribute across its subsystems in whatever configuration its captain wants. By default, each subsystem will have 50 units of power in each of its four subsystems. Furthermore, the base stats of a piece of equipment will always display its expect performance against that 100 mark. If you have less than 100 power in a subsystem, then your equipment will not perform as well as its tooltip and stats suggests it can, but if you have more than that, then it can and will exceed its listed statistics.

Without using certain bonus modifiers (such as warp cores that may increase a subsystem’s power cap, or bridge officer abilities such as Overload Subsystem Safeties), a subsystem’s power can go no higher than a setting 125. With a maximum power investment of 100 – this is where the importance of efficiency becomes apparent, as it is the only way you will be able to maximise the performance of your systems and equipment.

If you invest in efficiency at all, you will see your starship’s subsystems can read well above the levels at which you’ve set them to. As a rule, all efficiency is subject to diminishing returns: the less energy you put into a subsystem, the greater the bonus power you will receive in that section. This bonus number decreases as you approach a power level of 75, and after that point – you receive no further bonus at all.

In a perfect world, your starship could have 125 power in each of its four subsystems and would perform exceedingly well in every aspect of its operations. Given finite power supply however, you will always be forced to weigh up your mission priorities, and compromises must be made.

It would be almost pointless to put efficiency skills into weapons, if that is a subsystem that is constantly run at over 75 power. Naturally, you’re better off spending that skill point on another system you intend to sacrifice – such as engines. (Sacrificing engine power to squeeze more out of weapons or auxilliary is a very common choice, and more often than not leads to engines running with a minimum of power.)

Power management is a discussion unto itself, and efficiency is a huge part of it, but the mechanics of efficiency have a tendency to guid other build decisions when the same word is used. In particular; with engines.

I have often heard it said that there is no point in running a hyper impulse engine that is ‘efficient at high power levels’ when there is no bonus to efficiency above 75 power. This is simply false.

There are – with a couple of unusual exceptions – three basic engine types in Star Trek Online.

Standard impulse engines are advertised as having no efficiency modifiers whatsoever and perform at a flat rate commensurate to the amount of power they are provided.

If you assume ‘efficiency’ is governed by the same rules across the board, you would be wrong.

The same diminishing returns that affect your subsystem efficiencies have absolutely nothing to do with the performance of your engines, no matter what type you have chosen. And this can be demonstrated through testing. 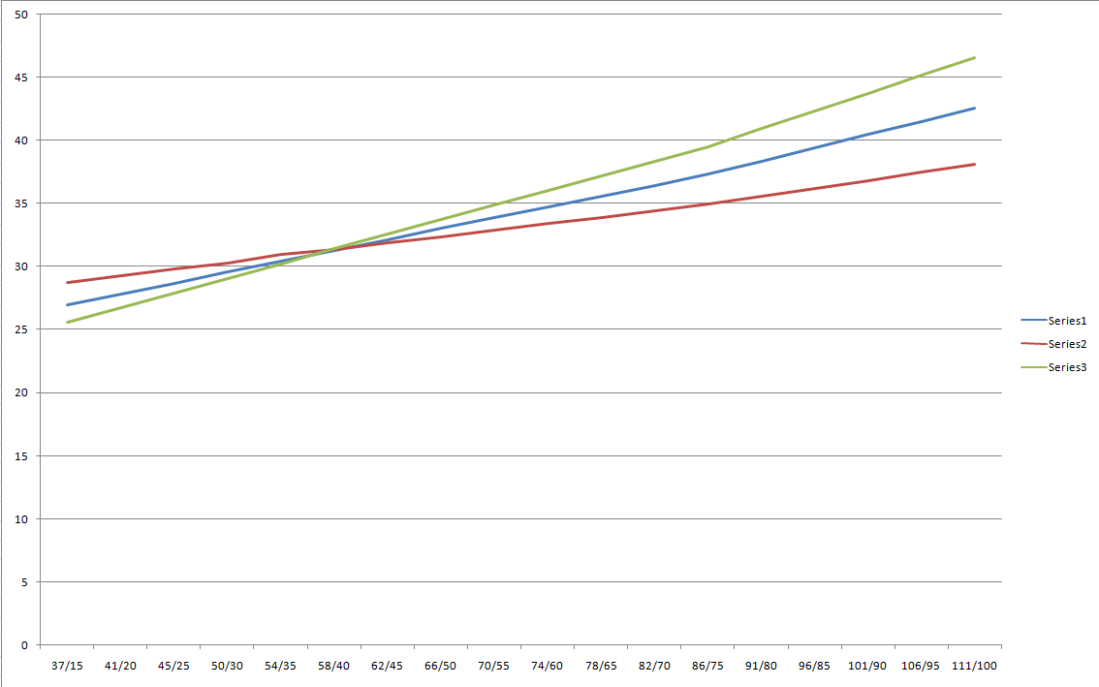 The above is a graph charted using my build for the USS Ramillies, using standard Mk XIV (common!) impulse engines of each of the three types. 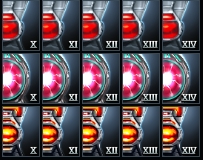 I used common (white), non-reputation engines for this test because – free of modifiers – they are a control that won’t be affected by more esoteric statistics, including [spd] modifiers or other rarity bonuses. This is as close to raw engine data as I can get without datamining, with stepped increases in power to assess performance figures. (Displayed across the bottom, with the ‘real’ power figure against the base power figure)

In every single case: the point of equilibrium in efficiency for impulse engines is a flat number of 60. At this mark, all three engines perform identically in every respect.

Above 60 power, then the clear winner in all conditions is the hyper-impulse engine.

What can be concluded from this?

How much importance you put in your raw power levels is going to dramatically influence what engine you should be favouring. I’m going to go into power a lot more with the Ramillies and Reprisal builds, but the short answer is this:

If your engine power – through efficiency or choice – runs higher than 60 during combat (the time that matters most) then you you will get more benefit from a hyper or standard impulse engine mthan you will from a combat impulse engine, in all conceivable circumstances.

At endgame, it is unlikely that you will have less than 60 subsystem power as a Federation captain, and even less likely if you are an escort pilot running Emergency Power to Engines as a speed tanking skill. It is very difficult to recommend combat impulse engines when pursuing a Starfleet build.

Romulan captains (faced with Warbirds that have less power potential than equivalent Federation and Klingon ships due to the reduced power output of singularity cores) will likely find more utility from combat impulse engines.

As a final thought – just how dramatic is the difference between a Mk XIV common engine and a Mk XIV reputation engine, such as the Iconian resistance hyper-impulse engine?

It’s significant, and at a glance,  the purple line (Iconian Engine) shows just how much better reputation gear can be over its basic equivalents.

Next time, I’ll talk about power and how it factors into the Ramillies and Reprisal as a basic requirement of design.