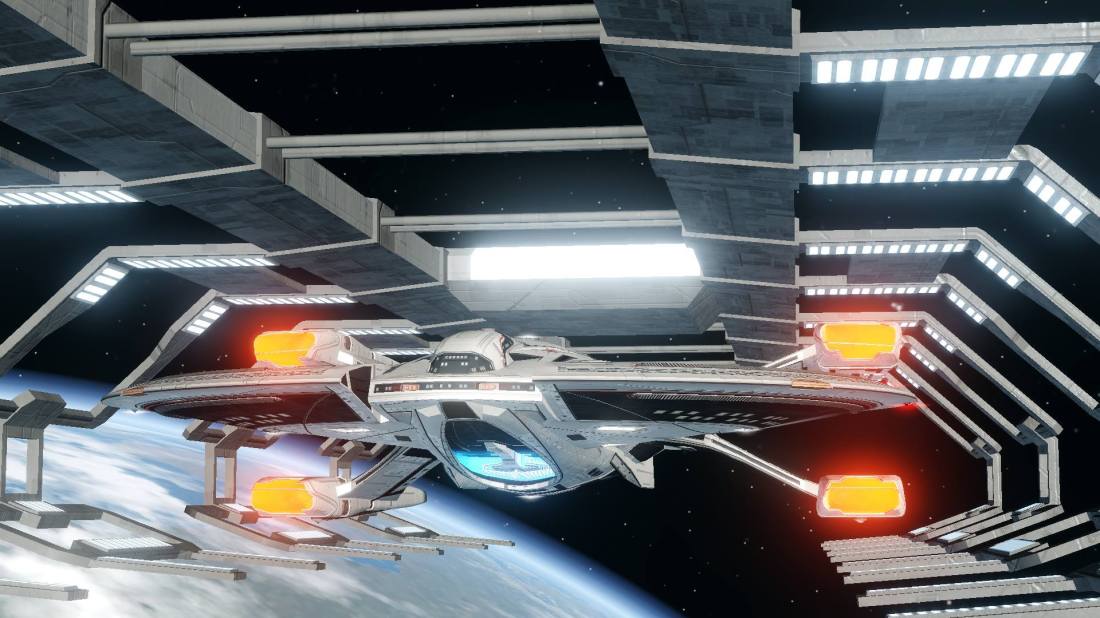 Several weeks ago, Cryptic announced another release in the series of Star Trek Discovery ships to come into the game. The Cardenas Command Battle Cruiser. As the name would seemingly apply, an image of a heavy armed and gunned starship comes to mind. However, what was in one’s mind, and what was reality were two different things.

With the release of the ship blog detailing the stats and layout of the ship, there was a large outcry from selections of the STO community.

A portion of the community immediately went into rage mode, decrying the stats. How dare a dreadnought have no tactical seating greater than Lieutenant Tactical. How was this starship suppose to do DPS? Players could get better starships and this ship wouldn’t be able to compete.

Even older starships walked all over this “Dreadnought”. Coupled with a low turn rate and inertia, this ship had already been dismissed. Additionally, while she could mount dual cannons, her low turn rate and tactical seating made it a lot more difficult.

A portion of the community, said to anyone who planned to get the ship “Just use BFAW and beams, that is all this ship is good for”. This is where i come in. Surprising, this rage got my passion going. I was filled with determination. I could never top the DPS charts, however, I wanted to show those members of the community that any ships can true contenders, and are not to be underestimated.

A experienced captain and veteran, someone who knows what they are doing, can turn any starship into one of the most dangerous opponents you could ever face.

Now, before we proceed, I want to make one thing very clear. From a sheer math and data point, those members of the community are right. In sheer numbers, the Cardenas class is never going to meet or match starships like the Odyssey, Scimitar, Arbiter or other more tactically focused starships.

Her three tactical consoles, along with at best three Lieutenant tactical BOFF stations (if the Universal is used as tac) means she misses out on the higher end tactical BOFF abilities. Like Beam: Fire at Will III, Attack Pattern Omega, Cannon Scatter Volley & Rapid Fire II (As the cannon three versions require a Commander Tactical station, since she is a dreadnought/cruiser that is not going to happen).

However, it is surprising when some members of the community decry Cryptic for constantly selling “Power creep”. However, when a starship is released that does not straight away top or beat all of its competitors, there is more rage. Sometimes from the very same community members who decried the “power creep”.

Simply, I decided to build this ship, as I wanted to prove something. Or, more likely, show some love to one of the most beautiful designed starships I have seen for sometime (I have a weakness for four nacelle starships).

My own Cardenas class was named for a Soviet-Era unmanned spacecraft/probe that was testing technologies and systems for manned spaceflight. I was actually inspired by the name when i learnt how the Buran was named. I got curious and googled soviet era spacecraft. Several options appeared but the name USS Zond really stuck with me.

Initially, I was going to do the normal Phaser build I usually do for Federation cruisers. However, after a short period, I thought that would be too easy. I needed a challenge, something a lot of the community would not expect.

So, USS Zond was born as a Polaron armed dual cannon fast paced line breaker. I designed (well, theory crafted) this ship in mind that she already has high baseline HP & shields. What she needed was punch and turn capability. I envisioned this ship having the ability to penetrate  enemy lines like at the Battle to retake DS9, and break them open for the rest of the fleet.

So, lets get down and get into her guts. Or, I should say what she has equipped in terms of weapons, consoles & other items. At this time, Zond is still under construction as I add items to her and grind what i need. But what i will list is the main components or her soul.

This set i theory crafted to use all three pieces. Naturally due to their bonuses for recharge and damage/critical severity. Since I will be using CSV/CRF and torp spread, those abilities combined with the cooldown reduction will give this ship a decent boost in firepower capability. Additionally, if I can combine the rotations of the abilities correctly, the boosts will be pretty significant.

This is especially true, as due to a smaller tactical console footprint, and that even that small footprint will not be filled with Fleet tactical consoles, i need to gain as much critical severity and weapon damage as possible.

This set I theory craft to use two pieces. The console and the turret. Originally I use going to use the torpedo as well. However, having used the torpedo on the USS Kershaw, as well as other set pieces which I decided were situational better, meant i decided to drop it.

I am using these pieces due to their boosts to Polaron and drain, as well as the two piece set bonus. Which boosts Polaron damage and most importantly turn rate. Which helps me considering this ships low initial turn rate, and my decision to arm her with cannons. As due to cannons low arc capabilities, even when under Cannon scatter volleys effect, I need to be able to maneuver this starship as quickly as possible.

I theory crafted that I will use all four pieces of this set, like I have with the USS Ryujo (though she is beam armed not cannon). More so I reason I choose this set was it was Polaron, keeping with the theme. The set bonus was not a major consideration though the Chronometric Energy Convertor clickable is definitely desirable.

The main heart & brain of the USS Zond, is the four piece set of the Gamma Team Synergies. Deflector, Engines, Warp Core & Shields. The general boosts to Polaron damage, turn rate, drain and other items keep with my general decision style. Having a ship have a main “build type” with a secondary type that merges with the main.

The set pieces having small but all around boosts to general areas ensures I try to eliminate any weakness in the ship. Or, in an attempt to ensure she doesn’t have a fatal flaw like a lot of high end builds do within the community.

I theory crafted that i would use two pieces of this set. The console and the dual cannons. The Polaron set bonus damage boost as well as the drain boost were definitely factors (mainly it was because it was a Polaron weapon good set). However, the main item is the dual cannons. Due to their proc, while small, could be an added benefit to the structural integrity of the starship. I am planning if possible to also nab a Colony Polaron tactical console that also boosts healing when activating certain tactical BOFF firing modes.

However, this may or may not happen depending on how high I can get this ships native critical chance and severity up to.

Being a what I call a “pocket carrier” I decided that the Zond’s hanger needed brothers or sisters. I have used this console to great effect on the USS Corona, USS Kershaw, USS Ability and others. This also means I have a broad spectrum of abilities. My main ship has Cannons, my ship pets has Beam Overload, and my console pets have BFAW.

This is again keeping with the ships theme of breaking enemy lines. Imagine this cannon armed ship coming after you, with 10 pets in its wake. Plus, it attempts to eliminate a blindside with this vessel. Considering this ships abilities limit it to a forward 90 degree arc, I wanted something to cover my six, or at least distract it until i could bring this ship around.

Another console I have used to great effect on several starships. This console’s being a main choice is due to its turn rate bonus mainly. The critical bonus boosts definitely help.

Mainly, while I am boosting this ships tactical capability as much as possible, I am not comprising her tanking capability or her ability to take fire. This goes into one of my main principals of my build designs for starships. Multi-layered redundancy (MMR).

MMR is my own design type, where i ask myself “What happens WHEN “x ability” or “x happens” or doesn’t happen. i build secondary systems and even tertiary systems into my starships. For example, if my massive DPS spike doesn’t occur, or it gets nuked or badly reduced, the ship has secondary systems to retreat or weather the enemy response.

Naturally, the game doesn’t really penalize you if it doesn’t work. But I like to role play that it does. More over, i actually try to act each time i go into a TFO that i don’t get a respawn, or if i do, it is going to take a real long time. If my ship gets destroyed, it could be really bad for the team. Which is one of my core gaming values, teamwork. I don’t want to do anything that forces my team to work harder if I can help it 🙂

Well, that is the introduction to the USS Zond. Apologises for the wall of text. However, for you lot, this has been a small window into my mind, how i design starships, and how sometimes within 60 minutes (shorter time that it took for me to type this out) I can build a entire starship from scratch.

This is what happens on a Sunday afternoon, when for two days since the ships release, the community has kept bashing a particular starship. 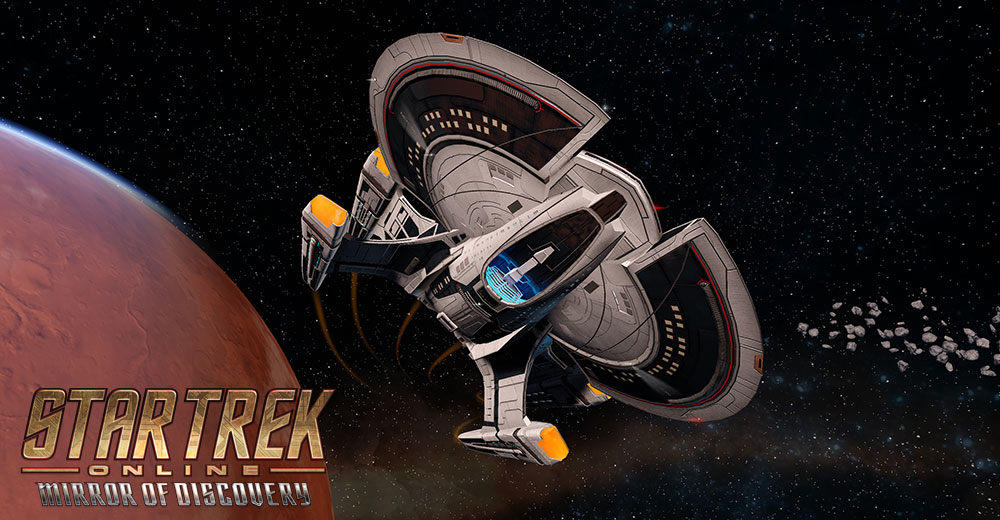 She is definitely not going to top DPS charts.

However, I decided to design her on a whim as I do get annoyed sometimes with the some members of the community who decries power creep, let expects every ship to get progressively more powerful, or have to have a minimum of “X BOFF Layout” or it is worthless.

One of my friends in the Equator Alliance, and one of the editors on this blog page once called me “Doctor Strangelove”. For my capability to seemingly build up any starship with crazy ideas or patterns, usually very quickly too. I think he is right, and sometimes I question how I can theory craft, build and construct a starship inside of one hour. But, I actually enjoy it. There is something to be said about being a Mad good guy starship designer.

As long as no one lets me near Omega particles or Red Matter, then we might have a problem.