Back in March 2018, when Gameprint & Cryptic started to offer personalize printed Star Trek Online ships, looking exactly how your ship looks in-game. I, like many other Star Trek Nerds, most likely giggled like little school children (come on admit it, you did 🙂 ). So,with the new service being offered. I ordered my flagship, the Tier 6 Fleet Intel Assault Cruiser USS Zuikaku, flagship of the 101st fleet.

Several weeks went by, and in early May 2018, one day the package arrived. I was so excited, as I had been dealing with a lot of things in my personal & work life. Having the model arrive, was a bright spot on an otherwise bad period.

Little did i realize, that i would be most likely one of the first orders, who would experience a major break of their model.

Needless to say, I was crushed. Barely able to take one photograph before I reboxed everything, and contacted Gameprint to let them know what had occurred, and to also request a repair.

I also informed Reddit/STO, one of the main community locations for discussing Star Trek Online. Thread in hand, I let them know what had occurred

The support I received from them was great. I also got support from the main Cryptic Community Manager Ambassador Kael who contacted Gameprint. In an effort to ensure that this would never happen again to anyone else.

Several days went by, and I organized with Gameprint to have my ship sent back to be repaired. After I turned down their initial offer of them telling me how to conduct the repair myself. It took several weeks to get the package sent off. However, that was no fault of Gameprint or their delivery company. But more the fault of my local delivery company who delayed the send back by 2 weeks.

And so, ship sent back. I waited….

June became July, and I communicate back and forth with Gameprint with periodic e-mails requesting updates as to the repair. Then, on July 25th, a new e-mail came in. This e-mail, made me both excited, and worried at the same time.

)
We have reprinted the bottom half in tough resin. The modelling team just finished gluing and cleaning the ship. Now it’s in painting.

The phase “cut in half” doesn’t make any ship captain feel good at all. But I trusted the Gameprint team to get the job done.
Then two weeks later, I was informed the ship had been repackaged, and was on her way back to me.
Ship return & Review
A week later, the USS Zuikaku returned home. As one could expect. I was worried. Scared that unboxing her again would show another massive failure or break. Like the USS Reprisal mentioned in another blog, she was extensively protected. One could say over protected. But considering the cost, and the model and customer target base. I was glad.
It also seemed, that the USS Zuikaku incident may have been the trigger for a completely new way of packaging and sending ships to clients. If that hypothesis is true, then I am OK with what happened.

Ship unpacked, and she looked beautiful. The one slight issue was a slightly bent nacelle. But considering the width of the nacelle struts even in resin (1mm thick, if that) I am not surprised the weight of the nacelles might have caused a slight “bend”.
A better angle, shows the slight “bend” of the nacelle. 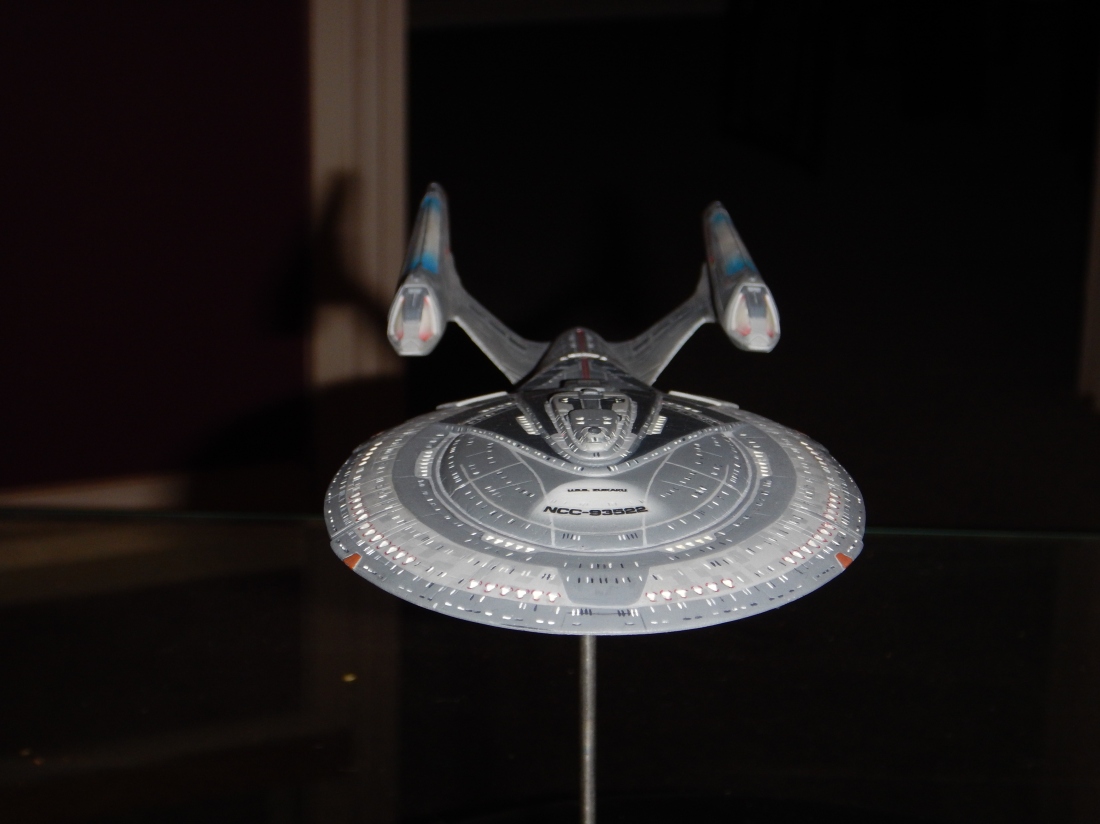 As you can see, the bend is pretty slight. The nacelle in question that is bent is on the port side of the second picture. The nacelle pylons still feel like they are flexible and can bend and twist. This does not surprise me, even considering that they cut my ship in half, some sections would still need to be flexible in order to have some give.
This is especially true, that while the model is light, the nacelles themselves considering their location and supporting pylons are still a heavy load.
Now, Gameprint mentioned that they cut my ship in half. However, I seriously cannot tell where that occurred. The repair (at least because of my paint job selection) is so well hidden, there are no clues to its probable location.

Considering how she was returned, a slightly bent nacelle is something I am more than willing to live with.  The timeframe from when Gameprint received my ship, to when the repair was completed seems to be 1 month. But considering how busy Gameprint have been with all their orders, as well as the seriousness of the damage, that timeframe is more than understandable.
Conclusion
I have to say, Gameprint really did their best to ensure my issue was resolved. Additionally, they were pretty responsive when i requested updates about the repair status, as well as requesting updates about what they could do for me regarding options to fix or replace the USS Zuikaku. Or, alternatively the return of the money i paid.
I also didn’t go into detail regarding how this ship looks compared to my in-game USS Zuikaku. This was because this blog was more about the repair & support, than the ship herself.
Thanks to all the Reddit/STO community & especially Ambassador Kael of the Cryptic team for their support and assistance with getting this resolved.
Now the USS Zuikaku is back home, I am going to ensure I have a quiet period. However, knowing this ship, I basically know I am going to be back in trouble again within a week. This ship just seems to attract trouble.
I wouldn’t have it any other way 🙂